Dr. Hulda Clark was no Quack

Hero to modern medicine, not a scam nor a quack

It was with sadness that we heard of Dr. Hulda Clark's death on Sept. 3rd 2009. She was 82 and passed, NOT as a result of complications from multiple myeloma, but this possibility was later added a a possible contributing factor. She did have hypercalcemia but this could simply be from taking too much vitamin D. They do not tell you this, because the intent is to defame her and mislead you.

Is it not also sad that the following research was published a few months before she died but Hulda Clark did not receive any credit for her work?

See https://www.ncbi.nlm.nih.gov/pubmed/19366446 to read the full documentation of the peer reviewed and published scientific study that shows that frequencies can stop cancer.

Other works have been published since the that also support the claims of Dr. Hulda Clark.

While today Dr. Clark is harassed and victimized by the pharmaceutical industry, the FDA, the FTC, and some other members of medical community under the guise of quackwatch and quackbusters, she is considered by many who have used her techniques and protocols to be a hero and will in the future be hailed for her efforts to forward modern medical thought. Her claims are a threat to the drug companies and to surgical hospitals which are the basis of health care throughout the world. The worldwide medical care system is about to suffer massive losses and is struggling to prevent this although almost everything that Dr. Clark claims is supported in current textbooks.

Just what are these claims that Dr. Clark makes? Dr. Clark claims that much of our bad health comes from chemicals and toxins that we are subjected to on a daily basis. Among these chemicals are mercury from amalgam dental fillings and isopropyl alcohol from cleaning products and many others. She also claims that in addition to these chemicals that there are many parasites that invade our bodies and cause illness. Her solution to the problem of health is to eliminate these foreign contaminations. Remove unwanted metals and chemicals from your body, eliminate disease causing parasites, drink water to keep your body cleaned out, eat proper chemical free and parasite free foods for nutrition. What could be simpler than a clean healthy diet and a clean healthy environment?

So what is wrong with her claims? First, the claim about mercury puts the American Dental Association in a bad position. They have been telling people for years that dental amalgam is safe. It is not! Once an amalgam filling has been placed in your mouth, it starts poisioning your body. The saliva in your mouth combined with enzymes secreted by bacteria leaches mercury from these fillings and you swallow it. Additionally, mercury vapors escape from the filling and you breath them in injuring your lungs and poisioning your blood. If you have any doubt about the toxicity of mercury, I can tell you. I once dropped a mercury thermometer in the chemistry lab. They evacuated the lab and the entire building until cleanup and decontamination was completed by people dressed up in hazzard suits. The ADA has poisoned a majority of the people in this country with mercury and refuses to own up to its mistake despite the fact that european countries and others around the world now classify dental amalgam as hazardous and prohibit its use.

The second problem is with parasites causing cancer and other illness. Just pick up any good textbook on parasitology and read it. It will tell you that parasites cause cancer, intestinal disorders, liver and kidney failure, as well as many other illnesses. So why does the medical profession deny this? They will tell you that flukes mentioned by Dr. Hulda Clark exist only in Southeast Asia in order to debunk her theories. They are wrong! While many of these flukes are indigenous to SE Asia, they are not limited to that area. Many soldiers from the Vietnam war unknowingly brought these parasites back with them contaminating their families and others. Many Americans travel to Thailand, Malaysia, Borneo, and Indonesia every year and bring back more of these parasites. Because these parasites were not expected to appear in the US, the medical schools have taught the medical students ( now doctors ) not to bother looking for these parasites. You can look in third grade or fourth grade health books to find out about parasites but many doctors do not even acknowlege their existance.

The third problem is the stubborness of the medical community. If a change does not make their job either easier or more profitable, the doctors and the AMA do not want it. Society is lead to believe that the AMA is there to promote good medical practices. It is not! The primary function of the AMA is to preserve the income and status of its members. The medical profession has costed us millions of lives of loved ones by refusing to accept change. This can be seen in the persistance of the idea of spontaneous generation which was perpetuated for hundreds of years. The idea was shown to be wrong in 1668 by Francesco Redi' but it took almost 200 years before the medical profession finally accepted that spontaneous generation was wrong. In 1840, Ignatz Semmelweis proved that washing hands saved lives in hospitals but years later during the US Civil War and even for many years after, many American doctors refused to wash their hands calling it a rediculous waste of time. Today, the refusal of the medical profession to accept certain things causes the deaths of millions each year. Sepsis and septicemia kills millions, far more than AIDS, yet where is the publicity? What improvements have been made? Doctors say that they are concerned about finding the actual cause of AIDS yet when they are presented with reasonable evidence that parasites may be involved, they turn up their noses.

This problem reaches to the basic snobishness of medical doctors in general. Medical doctors are considered elite. Basically, Dr. Clark is only a naturopath, how can she know something that they do not? The FDA has the arrogance to claim that only a drug can cure a disease. Only a doctor can provide a cure to a diseased person. Herbals are nothing more than junk to the FDA which has tried on several occasions to outlaw them. The FDA is currently trying to have vitamins and herbals only available by prescription.

Lastly, there is the problem of the zapper. Some sites try to debunk the zapper by claiming that there are no peer review studies supporting Dr. Clarks claims about the parasite zapper. They completely ignore that the only zapper study published showed significant positive results. They also fail to mention that a FDA approved peer reviewed study can cost millions ( up to $800,000,000 US ) of dollars to complete. Additionally, when asked if they would perform such a study, doctors invaribly say NO!. It should be noted that we have offered a reward for 5 years to get any medical doctor to perform a study using our zapper. No medical doctor has even mentioned interest or acceptance as of this time. This is despite the reality that the zapper is a basic bioelectric resonance device which has genuine value.

Really, using the zapper is just plain common sense. If a lot of electricity can kill a man, why can not a little parasite be killed with a smaller amount. Consider this, antibiotics are poisons, we only take a small amount of the antibiotic to kill the smaller organisms that are attacking us. Taking a larger dose could kill us.

The zapper has been proven time and again to kill bacteria, protozoa, and other small parasites in the laboratory. It is better, more powerful, and more efficient than antibiotics in some cases! It does not take a medical degree to see this. It only takes a simple microscope, some grass from the yard, some water, and a zapper. Infusorium is a mixture of bacteria and protozoa that is made by putting dead grass in a cup of water. Make 2 identical jars or glasses of infusorium. Zap one several times a day, but leave the other one alone. The zapped infusorium will remain relatively clear while the unzapped infusorium will turn cloudy with bacteria and other germs. It is odd, but I have reviewed several text books on biology and microbiology and have yet to find a single mention of using electricity to control bacteria, protozoa, or other organisms. This is despite the fact that zapper like devices have existed since the 1800's. These Medical Electric Batteries were available in stores everywhere, including Sears, Montgomery Wards, and drug stores.

Why will Dr. Clark be hailed as a hero? Because she is right. Mercury and many other metals are poisonous to our bodies. Isopropyl alcohol and many other organic chemicals are very harmful to us. Parasites do cause illness and some do lead to cancer. The zapper does work. The elimination of toxic chemicals and parasites from our bodies will improve our health.

[ If you watch this video on youtube, all the chapter (Links) are enabled. ]

Free E-Book: [ THE CURE FOR ALL DISEASES ] 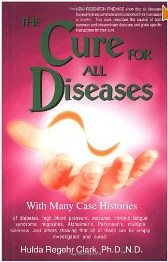 This video is public domain, and Dr. Clark wished everyone to copy and distribute video freely in hope it may help others.

Please review and sign this Petition to stop the FDA from interfering with zapper availability.

See this page for More information about Dr. Clark and quack sites.

Does the Parasite Zapper Really Work?


They will likely want to learn more about Is Hulda Clark A Quack?, and her protocols, how to find the Best Zapper, the ParaZapper UZI Review.

Get a ParaZapper at Buy Hulda Clark Zapper